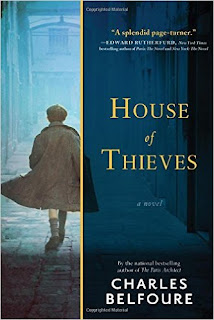 I'll admit that I initially ran hot and cold on the idea of House of Thieves by Charles Belfoure. I am not always a fan of gangs and mobsters because they tend to be a bit too violent for my tastes. But I am happy to report that this story is much more than its seedier elements.

John Cross is a successful architect with a wayward son. George Cross, a recent Harvard graduate, has very hefty gambling debts and they have been called in by New York City's most ruthless crime boss, James Kent. As there is no chance of George paying up, Kent holds him ransom until he can extract a promise from his father -- to assist Kent in robbing his wealthy clients by using his inside knowledge of their homes and buildings.

The main plot of this story is exciting and unputdownable. Make no mistake -- Kent is definitely an evil and formidable villain. But there is a hidden surprise in the side stories about John's other two children. It balances out in a way that gives the reader a rest between suspenseful moments. The ending is a bit fanciful and tidy but, while caught up in the excitement of the story, I didn't mind it. And if you need more inducement to pick up this book, this story is set to become a television series (miniseries?). As it is quite picturesque--full of beautiful buildings, colorful underworld characters, and society grandeur--I'm sure it will make a thrilling show!