New in Paperback: The Library at Mount Char 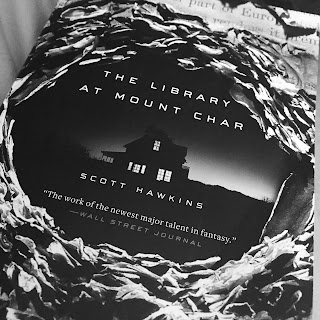 I have to admit that after reading the first chapter of The Library at Mount Char by Scott Hawkins, I took to Instagram to ask my fellow readers if I should keep going. Why? Because the first chapter was dark and violent and full of surprisingly awful characters and I didn't know if I could stomach a book that continued on like that. Luckily, a couple of you convinced me to stick with it and, while it's probably not going to be an all-time favorite, it was a unique read with some very big ideas and some really interesting characters that paid off in the end.

I don't really know how to summarize this story without giving everything away. It's a story that builds, turns back, flip-flops, and builds again. The main character is Carolyn and we know at the start that she calls herself a librarian, she's nowhere near normal, and she's walking down the street the early morning hours, covered in blood. What follows is the building of an alternate universe where manipulation of the laws of physics and biology is possible for those who have the knowledge. The owners of that knowledge, however, happen to be a horrible, horrible bunch.

There is a LOT of killing in this tale and a LOT of violence, but, strangely, also some extremely honest friendships and connections, including some that you really would never expect. The story is rooted in the intersection between science fiction and fantasy but so much of it is brutally real that it doesn't necessarily seem like a genre book most of the time. It definitely has the potential to be a long-lived cult favorite.

Unwrapping my mind from around this tale,
K
Posted by Kristen M. at 12:43 AM