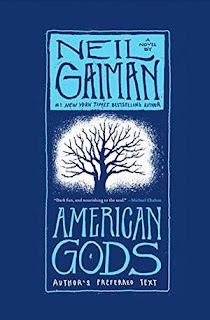 As the first casting decisions for the upcoming miniseries came out, I decided it was time to reread American Gods and to see what Neil decided to add back in to the Author's Preferred Text edition. I liked this story much more than I did when I first read it almost five years ago. At that time, I had just gotten started with Neil with books like Coraline and Good Omens and didn't really know to expect sex or violence in his stories. But now that I know him and his work better, there was nothing unexpected in the book and I was more able to focus on the details of the story and the mythology. I can't find where but I know I've seen Neil himself say that his fans can be divided into two groups, those who love American Gods and those who hate it. It is definitely a divisive book, dark and brooding with just a touch of redemption at times. This time through I appreciated the crafting of the characters and the vivid sense of each place that Shadow found himself in. Anyway, the casting decisions so far have been stellar and I'm really looking forward to watching the miniseries hopefully late this year. 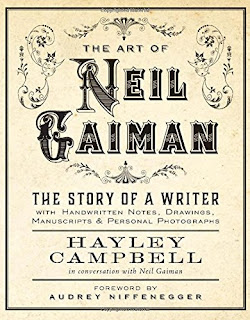 The Art of Neil Gaiman is a comprehensive review of almost everything Neil has done in comics, novels, film, and children's books by Hayley Campbell, a young family friend who a journalist and the daughter of illustrator Eddie Campbell. She had access to all of the stray papers in his attic and to him and his memories. It was really interesting to read how his career evolved, which things he loved working on and which were more like "work", and what things he would possibly like to write in the future. This is a book for diehard Gaiman fans and it was a fascinating inside look.

Worshipping at the altar,
K
Posted by Kristen M. at 12:40 AM