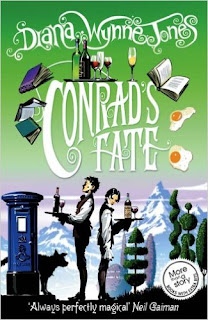 Conrad's Fate takes place a few years after The Lives of Christopher Chant, while Gabriel de Witt is still Chrestomanci. It has a complicated plot but here are some of the elements:

A mountain setting in Series Seven (Chrestomanci's world is in Series Twelve)
A kid, Conrad Tesdinic, with bad karma, a flaky mom, a runaway sister, and a controlling uncle
A ridiculously big mansion (Stallery)
A teenaged stowaway, Christopher Chant, from another series
A missing enchantress (Millie)
A grumpy butler
A mysterious "pulling of the possibilities" -- using magic to affect stock markets and such
And ... a raucous troupe of actors

I always forget that Conrad's Fate is my second favorite Chrestomanci story until the next time I binge read it and find myself hating that it's over far too soon. I adore the friendship of Conrad and Christopher, the upstairs/downstairs world of Stallery, and the mysteries of the probabilities and Millie. I also love the fact that DWJ chose to write this book in the first person. She didn't do that very often (The Spellcoats might be the only other one) and it's interesting to have the story from the point of view of a kid who is being manipulated. This book definitely needs to be read after The Lives of Christopher Chant because it has spoilers for that one but could be your second Chrestomanci read.

Question of the Day: If you were to discover a family secret, would you rather it be: a noble title, money, or magic?

Reveling in the possibilities,
K
Posted by Kristen M. at 12:01 AM