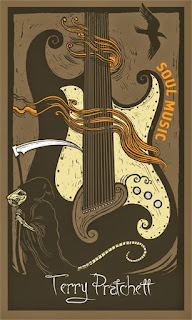 It seemed almost predestined that I would be reading Soul Music when the inestimable Chuck Berry died last week. This story is an homage to the power and the eternal nature of rock and roll. It is also a study of humanity and fate. Death has been overwhelmed by an expected but unavoidable loss and he goes in search of oblivion, leaving his job to be automatically filled by his sixteen-year-old granddaughter, Susan. One of Susan's first empty hourglasses belongs to Imp y Celyn, a young musician. But, just as she prepares to break the rules and save his life based on a strange feeling of familiarity, she is preempted by a chord. The music instead saves him and takes over his life.

This is one of those books that has SO many references that it is impossible to catch all of them on the first or even the second read. Even the smallest throwaway phrase can be a joke or a play on words. The big ideas though are easy to catch. The music of the universe began with the big bang and rock and roll has the power to change the world. Also, a human would not make a successful Grim Reaper because it's a job that has to be done without emotion, no matter what ... usually. I loved all of the side characters, even C.M.O.T. Dibbler and Ande Supporting Bands. This is a good, solid book that must have taken ages to put together so seamlessly.

Question of the Day: In this story, almost everyone who hears the Music With Rocks In has an urge to play it or worship at its altar. Did you ever dream of a rock and roll lifestyle? What is your musical life story?

My answer? As a kid, I sang in the church choir and in one or two school musicals, played the trumpet for eight years, and studied classical piano for a bit. None of those seemed particularly "cool" though and I always wanted to learn guitar. I tried one lesson but the guy was a 90's metal band type who taught songs instead of fundamentals and it just wasn't the right fit for me. After high school, my daydreams turned to waiting for the day that one of my favorite bands desperately needed me to be a backup singer in the middle of a show. But, no matter how many concerts I went to, they never felt the need to grab my hand, pull me up on the stage, and marvel at my skill. Sigh. Now I just crank up the car radio on sunny days and sing until I'm hoarse.