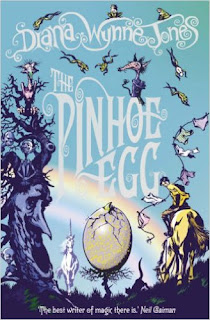 The Pinhoe Egg is simply Diana Wynne Jones at her best. This final Chrestomanci book has a stellar cast of heroes, animals, and villains. It takes us out of Chrestomanci Castle and down into the surrounding villages, exactly where those who live there don't want "The Big Man" and his family to be. The villages are mostly populated by magical families of long-standing, the Pinhoes and the Farleighs, and they have a war brewing between them. This is because the head of the Pinhoe family has gone a bit mad and has begun using her power against her friends and enemies alike. The best hope of stopping her comes from her grandchildren, Marianne and Joe, but their lives soon become entangled with those of the Castle kids and everyone has to figure out what they are best at before they can help others.

I honestly got teary a couple of times while reading this one because it is just so wonderful. Of all of DWJ's many worlds, this is the one I would want to live in ... preferably as Marianne. I love the animals (griffins! unicorns! horses! cats!), the very sweet Jason/Irene story, the parallels between Cat and Marianne, the partnership of Joe and Roger, even the adventures of Chrestomanci himself. And I love that Cat is still trying to recover from the damage that his sister did to him in Charmed Life and trust himself and others. This is probably-definitely on my top five DWJ books of ever list.

Question of the Day: There are three different kinds of magic in this story: enchanter magic, dwimmer (natural magic), and the hybrid tech-magic that Joe uses. Which kind of magic would you most like to have?

My answer? If you can't tell from many of my questions this month, I really, really, really wish I could live in a world with magic! As for which kind, I think it would be the strong dwimmer that Cat has. I have a pretty brown thumb so the ability to make things grow and thrive seems like magic to me even coming from those who can do that in our world. The connection to animals like Syracuse would be amazing too. Sigh.