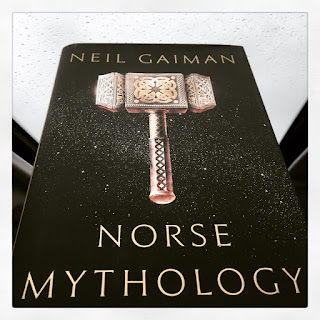 It is becoming a new tradition for me to sneak a Neil Gaiman read into March Magics/DWJ March each year. Neil was such great friends with Diana and Terry that it just feels right to add him into the mix. Anyway, he obliged me this year by having a new book out-- Norse Mythology --and I was able to fit it in right at the end of the month.

The book title is pretty self-explanatory. Neil read original sources (Prose Edda and Poetic Edda, not in their original language) and, simply, retold the stories in a way to capture modern readers. The time flies by as you read about how the world was formed, how Thor got his hammer, and how Loki is seriously the worst. I'm not a huge mythology person but even I was caught up by each of these tales and transported to another world of giants and serpents and gods. I don't know how Gaiman does what he does but he did it again in this book.