A Fish Out of Water or Two

I'm still a bit behind on reviews so I'll be doubling up today on two stories that feature a strong female protagonist who must find her way in a foreign culture -- one of them in her own city! 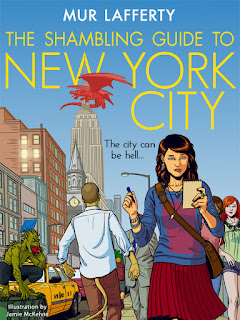 Mur Lafferty's The Shambling Guide to New York City is one I kept seeing mentioned in recommendations and "best of" lists so, even though I don't read much modern urban fantasy, I grabbed a copy. It's about Zoe Norris, newly returned to New York City after a very bad breakup (she was sleeping with her married boss). She's looking for work and sees a help wanted ad in a very strange bookstore that seems to be perfect for her -- travel guide writer, the same job she just left behind in North Carolina. The owner of that company happens to be standing right by her when she sees the ad and he bluntly tells her that she is the wrong person for the job. Zoe doesn't give up though and, when she happens across another employee of Underground Publishing in a local coffee shop, she manages to get a foot in the door. Whether the job is actually going to be a good fit for her will be determined once she finally sees who (and what) she will be working with and whether or not she can survive her first days on the job.

This story was funny and sexy and terrifying and I had an absolute blast reading it. There were all sorts of creatures and people, lots of adventure and peril, and New York City herself was actually a character -- and not in that way that one usually says "it's like the city was a character". No, in this book it was literal. And there was one sexy-type scene that embarrassed me so much that it made me think that I should probably read more romance because my reading choices are apparently a bit prim. But I loved Zoe's confidence and her acceptance of a ridiculous amount of diversity. She was sensitive while finding out new information and tried her best to be an ally, even when it put her life in danger. I just bought the second book in the series, The Ghost Train to New Orleans, and I'll also be grabbing Lafferty's recent Six Wakes based on Jenny's great review. 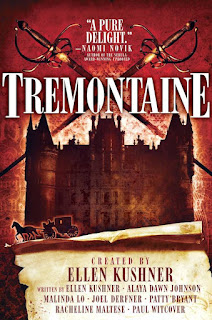 For the longest time I kept seeing everyone talking about Tremontaine, a serial novel set in the Swordspoint world created by Ellen Kushner, and wasn't sure it would be my thing. But a few weeks ago I saw that an omnibus of the first season was coming out and so I got it from the library just to try it out. It didn't take me long to totally get into the story and not much longer to finish all 673 pages!

In this alternate universe, southern hemisphere cultures are the most advanced, able to navigate the oceans and travel to the dreary north to deliver exotic commodities like vanilla beans, saffron, and, most importantly, chocolate. A young woman named Kaab, a member of the main trading family from her land who is trained in espionage and combat, has been banished to the north because of a mission gone wrong. What she finds in her new home is swordplay, political machinations, and, unexpectedly, friendship and romance. The story also follows a young scholar, a turnip-farming girl with a head for math, the Duke and Duchess of Tremontaine, and others who are looking to get the most out of the City they love/loathe.

This was written as weekly episodes, each by a different author than the week before -- 13 episodes, seven authors. There were a few inconsistencies but the overall story was ridiculously compelling. There were even some unexpected plot directions that left plenty of room for, hopefully, surprises and redemptions in the second season. I believe all of the episodes are already out for that season so I'm not sure if I'll cave and buy each one now or wait for the second omnibus. If I do wait, though, I'll be filling the time with Kushner's original three novels! Her writing was my favorite in this book and I look forward to seeing how she created the world.

Considering a quick jaunt out of my comfort zone,
K
Posted by Kristen M. at 12:40 AM