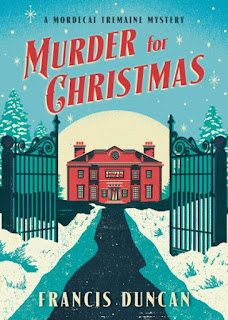 Originally published in 1949, Murder for Christmas by Francis Duncan was found in the archives at Vintage Books a few years back and not much was known about the author. Eventually, they discovered that it was the pen name for one William Underhill, a lecturer in economics and history. Sourcebooks is now publishing this book just in time for intrepid readers to unwrap a little murder with their holiday festivities.

The simple set-up is a traditional holiday party at the country house of wealthy bachelor Benedict Grame. He likes to play Santa and his guests range from best friend, Jeremy Rainer, and Jeremy's ward, Denys Arden, to various hangers-on and, not last or least, new acquaintance Mordecai Tremaine, amateur detective. Grame's secretary, Nicholas Blaise, sends Tremaine a note with his invitation saying that he thinks something is wrong with Grame and Tremaine can't resist a visit to Sherbroome House for Christmas. When a murder indeed occurs on Christmas Eve, Mordecai is the only one who can piece together the clues.

I know that this sounds like a pretty standard country house murder mystery but there is one big difference that I LOVED -- everyone is suspicious of Tremaine and close-lipped! They know he's an amateur detective, known publicly for solving a murder in Sussex the summer before. And many of them have something to hide and therefore do not want Tremaine snooping around and sussing things out. This is so different from many other amateur detectives who manage to collect tons of information from every spectator and suspect. It was refreshing to have Tremaine get the cold shoulder, to be lied to, and to be deliberately avoided. The mystery was also satisfying and I hope that more of Francis Duncan's books get reprinted in the US! (It looks like Vintage has started reprinting them in the UK.)