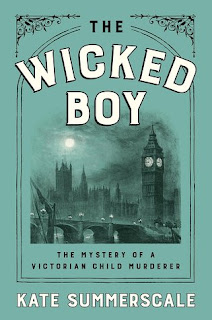 Kate Summerscale's non-fiction is something unique. She completely reconstructs a crime but within the context of history. In The Wicked Boy: The Mystery of a Victorian Child Murderer, the story of Robert Coombes, a young teen who stabbed his mother, is only half the tale. The book also delves into such diverse topics as living conditions in late nineteenth-century London, the workings of the justice system, the conditions at asylums, the contributions of the Aussies to WWI, and how the past connects to the present. I found almost everything in this book fascinating -- and I think I might have finally retained how the pound/shilling/pence system works! This isn't a quick read but it was satisfying to explore so many topics at once.

One of the topics explored was the blaming of sensational literature and penny dreadfuls (cheap paperback adventure and suspense stories, mostly sold to boys) for the bad behavior, crimes, and even suicides of children and teens. This led me to pick up my next Classics Challenge read, Treasure Island, which I will write about soon. I love when one book leads to another!