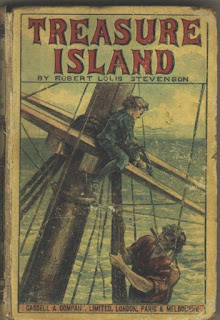 Thanks to a mention in my last read as a book that corrupted young readers, I have just finished my second Back to the Classics Challenge read -- Treasure Island (1883) by Robert Louis Stevenson, my pick for "A Children's Classic". Though I had seen film versions over the years (Muppet Treasure Island is one of Z's favorites), I realized that I had never actually read the book. The story was originally released serially under the pseudonym of Captain George North in a publication for boys. It chronicles the adventures of young Jim Hawkins, from his tame life as the son of modest innkeepers to the perilous search for buried treasure.

I was just reading that Stevenson wrote this book quickly because, as it was for children, he felt he didn't have to be so careful about quality. Luckily, his inherent talent as a writer shone through and this became a well-told tale. I was surprised by the violence but more-so by the moral ambiguity of Long John Silver. His ability to quickly see which way the winds were blowing, so to speak, and change sides in a conflict to his benefit seems like a far more dangerous lesson than discovering the many different ways in which men can kill one another. I still don't think this book contributed to the delinquency of Victorian minors though. If anything, the lesson I came away with is that islands with buried treasure on them and the ships that get you there are all full of perils that make the gold barely worth it.

Not feeling adventurous,
K
Posted by Kristen M. at 12:15 PM