Next in the Series

I just finished books from two of my favorite series as the newest and latest in each series is out soon (or recently). 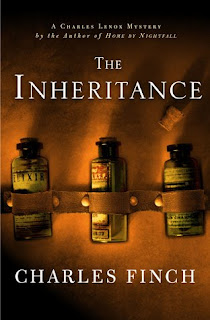 The Inheritance is the 10th Charles Lenox Mystery by Charles Finch. This one stood out by having a glance back into Lenox's Harrow days and also a surprising villain. 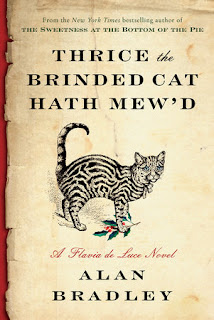 And the 8th Flavia de Luce Novel by Alan Bradley is Thrice the Brinded Cat Hath Mew'd. Though Flavia is still twelve, she's slowly starting to react in a more mature and tactical way to some of the things around her and it's a pleasure to see.

Obviously I'm not going into the plots of these since they are so far along in their respective series, but I will tell you that they both have major changes and shocking happenings. I'm actually feeling a bit betrayed by both authors at the moment and hope they redeem themselves in the next books. It's less likely to happen with Finch because The Woman in the Water is actually a prequel, a return to Charles Lenox's first case, so I won't find out what happens next in the current timeline until book 12. But Bradley's choice of the title The Grave's a Fine and Private Place, as a riff on Peter S. Beagle's classic, is worrying me too because that was an incredibly depressing read and, in a way, I don't want to wade through what will inevitably come next in Flavia's life. I guess I have to give credit to these authors for not letting their series get stale and for making me care so much. I guess. ::broken heart emoji::

Are either of these series that you follow? Are you caught up?

Extremely invested,
K
Posted by Kristen M. at 12:25 AM