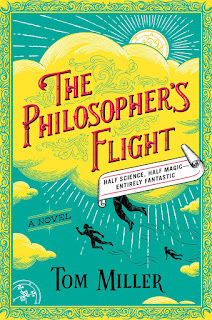 You know that thing where you start reading a book and, almost from word one, it grabs you in that way that lets you know it is absolutely going to be one of your favorite books ever but then you get nervous and you back off of that assessment because you don't want to be disappointed since you aren't certain where the plot is going and what if the author ruins what is essentially a perfect-for-you novel with something ridiculously out of character but then, as you are speeding to the end, you find that everything unfolds in an acceptable way and now you have turned the last page and can certify that you are indeed satisfied and that this was an amazing read? Yeah. That.

This sets up an amazing alternate history where (mostly) women have discovered a way to harness the powers of the natural world in order to do things like grow crops faster, teleport, fly, and control smoke. These things are not done with magic but simply with elemental powders, hand movements, and natural ability. This is, of course, resented by some and declared to be devilry by others. And yet the women have established themselves as soldiers, problem solvers, and so much more. Now it is the early 1900s and Robert Weekes, son of an empirical philosopher, finds that he has enough talent that is worth exploring that he decides to apply for college -- unorthodoxly to Radcliffe, a women's college in Boston, incredibly far from his Montana home. He is accepted and begins his year of proving his talents in order to land the job he has always felt destined to do--one that a man has never done before.

There was so much to love in this story. My absolute favorite thing was that this was not an alternate history where women just have power and so they rule the world. The men in this story begrudgingly accept the worth of what the women do but, at the same time, resent that they are sometimes dependent and therefore try their hardest to trivialize women by, for example, taking away their right to vote. None of this was actually in the story itself but rather in the quotes at the beginning of each chapter, as historical records from both the past and future. This complexity is felt in the story though in the way that Robert is treated when he begins to enter the very feminine realm of empirical philosophy. He is polite and humble and careful but it doesn't matter because he is an outsider. And yet he still finds connections with staff and students and takes just about everything as a learning experience. He makes mistakes and has successes and learns more than just the techniques of his art. This book was just so thoughtful and complex and yet a bit innocent in that endearing way that a first novel sometimes is. Sigh. Yes, I loved it.