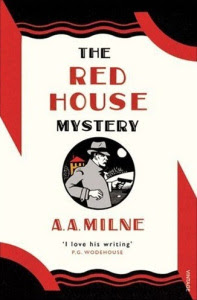 It's May and I've only just finished my fourth Back to the Classics Challenge read -- The Red House Mystery (1922) by A.A. Milne. I was hoping to be a bit farther along by now but I had a false start last week with a book I just couldn't get through. Anyway, this read was for the A Classic With a Color in the Title category and it's one that I've had on my TBR shelf for a few years now. I'm very glad that I finally got to it because it is a story written just for people like me--country house mystery fans.

In Milne's introduction he says "that the detective must have no more special knowledge than the average reader. The reader must be made to feel that, if he too had used the light of cool inductive reasoning and the logic of stern remorseless facts (as, Heaven bless us, we are quite capable of doing) that he too would have fixed the guilt." And, what do you know, he succeeded! In this story of newly-minted amateur detective Antony Gillingham who stumbles across a country house murder, Gillingham as Sherlock and his friend Bill Beverley as Watson lead us through every clue and thought process and we are allowed to solve the mystery alongside them. And I will proudly say that I solved the murder at just the moment that Gillingham did! Alas, Beverley was slightly behind us.

This wasn't a perfect book. It was a little choppy to start and slightly repetitive in places. But it was short and fun and obviously written by a fan of the genre. I'm disappointed that Gillingham didn't get to use his ever-improving detecting skills again but I'm equally glad that we ended up with the many adventures of our favorite honey-guzzling bear.