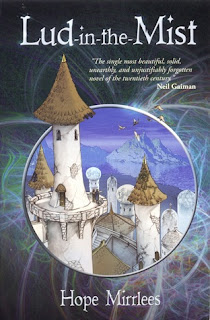 And in the sixth month, I finished my sixth of twelve reads for the Back to the Classics Challenge. Yay, me! I originally picked up Lud-in-the-Mist (1926) by Hope Mirrlees because Neil Gaiman  raves about it. I'm counting it as "A classic by an author that's new to you" because not only had I never read this author before but I had never even heard of her before reading Gaiman's The View from the Cheap Seats. I was able to scrounge up a used copy (which sadly ended up having water damage and various food spills inside) and am now acquainted with Ms. Mirrlees.

About this book, Gaiman says it is "a quintessentially English novel of transcendent oddness, set in a town on the borders of Fairyland, where illegal traffic in fairy fruit ..., and the magic and poetry and wildness that come with the fruit from over the border, change the lives of the townsfolk forever". It was one of his influences for Stardust and I could certainly see that as I read it. However, I have to admit that the oddness of this novel was such that I felt strong discomfort as I read it. I don't know if it was because Mirrlees was so good at describing fairy influence and power or if it was the mob mentality that rose up a couple of times or even if it was the enchantment and disappearance of quite a few children. Whatever it was, I found myself binging at the end to finish as soon as possible. (I told Z I was doing this and he thought it was the strangest thing ever and was even a bit concerned for me until I was done!) I am glad to have read it as it was an influence on books I love (Jo Walton points out that it was also obviously an influence on Jonathan Strange and Mr. Norrell) but now I would just like to stick to rereading those beloved tales.