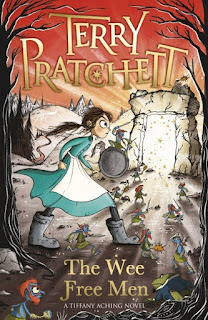 Welcome to our first MarchMagics group read -- THE WEE FREE MEN! Crivens! Though this is the 30th Discworld novel our beloved Sir Terry wrote, it is the first in the Tiffany Aching series and is a fresh take on that also-beloved world. It is billed as a YA series but I feel it is very different in tone to his children's books and fits more with his adult work. It is a story of danger and bravery, complex relationships and motives, and, yes, very ridiculous humor.

Since the plot of this first book is pretty straightforward (fairy queen steals child, protagonist comes to the rescue), how about we talk about the stellar characters today? 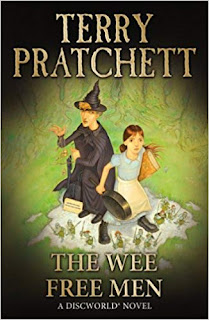 One thing that stands out immediately is the fact that Tiffany is only nine years old, doesn't know about her powers, and yet is already super amazing. She's a productive member of the Aching family, making the butter and cheese. She's a babysitter who takes her annoying little brother Wentworth on walks and even sometimes giving him sweeties. She's educated -- at least a basket of produce and a dozen eggs worth! And she's even a matriarch ... well, for a couple of days at least. She's a great protagonist because she's interesting from the start but, because she's so young, has SO much room to grow. 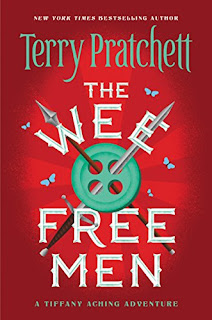 Then there are the titular Wee Free Men. They are thieves and fighters but also have the biggest hearts inside their tiny bodies. And how about that Scots dialect that the Nac Mac Feegles use? I kind of love when a book makes me read out loud inside my head to understand it. And, as Jean just found out, it also makes the audiobook version, read by the inimitable Stephen Briggs, AMAZING. 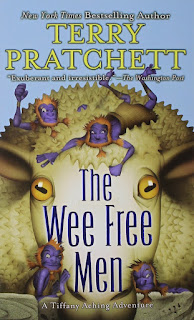 And, finally, there is the larger-than-life character who isn't even there anymore -- Granny Aching. Her influence on Tiffany, the entirety of the Chalk, and the supernatural world beyond is incalculable. I think the fact that Tiffany didn't even realize she was a witch proved she was one of the strongest ones possible. And yet she did it all as a "simple" solitary shepherdess, whose smoking habit seems a bit gross and whose belief in the medicinal uses of turpentine is horrifying.


So, if you read or reread along this month or even have read it in the past, what are your thoughts on the characters of THE WEE FREE MEN? Share them or any links to your own posts below!

Listening to the toad,
K

Postscript: Remember to observe a moment of silence on Tuesday (12 March), as we again mourn the far-too-early departure of Sir Terence David John Pratchett OBE.
Posted by Kristen M. at 12:03 AM