"From his perch behind the clock, Hugo could see everything." 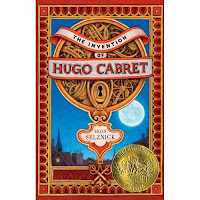 Ever since I first saw The Invention of Hugo Cabret on the shelf at the bookstore, I knew I wanted to read it. This book by Brian Selznick is very unique in that it is told partially in text and partially in hand-drawn black and white pictures by Selznick. It's 530 pages but only took an hour and a half to read so don't be put off by the tome-like quality of this book.

Hugo Cabret is a twelve year old boy that lives in the train station and maintains the clocks. He is very good with machinery and he steals mechanical toys from a toy stall in the station. One day he is caught and the toyseller has a very strong reaction to Hugo's notebook which was actually his father's and had sketches of an automaton man in it. With the help of the shopkeeper's god-daughter, Hugo sets out to find out the secret behind the automaton and the toyseller.

The best part of this book is that it incorporates a real-life character, Georges Melies -- one of the filmmakers in the early days of cinema. His role in the story is fictional but he was a real man and pioneer in the cinema. He directed over 500 films and used his knowledge of magic to produce some of the first special effects on film. He also began the science fiction and horror movie genres. Go read about his life if you are interested. If you just want a brief introduction to Melies and a good story about kids having an adventure, read this book.


Buy The Invention of Hugo Cabret