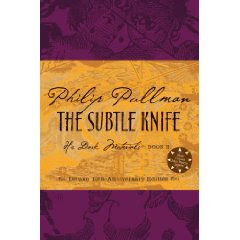 When I opened the book to copy out the first sentence of The Subtle Knife, the second in Philip Pullman's His Dark Materials trilogy, I thought I had grabbed the wrong book. The story ends so incredibly far from where it starts that I almost didn't remember how simply the journey began. This book was different from the first one with more action and a very quick moving plot. While reading The Golden Compass, I wasn't sure what exactly the religious controversy was about but it began to come the foreground in The Subtle Knife.

It's hard to talk about the plot of this book without giving away too much of the plot of the first book. The subtle knife in the title is a knife that is able to cut through the fabric between universes and allow travel between them. The journey that Lyra started on in the first book continues on in this book through parallel universes where she teams up with another child, Will. His quest to find his adventurer father becomes Lyra's as well and they bravely fight together. With the help of characters we have already met like the witch Serafina Pekkala and the aeronaut Lee Scoresby, we see Lyra and Will move closer to their destinies.

I wasn't put off at all by the religious and anti-religious undertones but it was a bit shocking to read about so much violence surrounding and involving children. I can't wait to read the final book in the series to see how this all ends. There were some sad losses in this one and I know there will be more in the next one.

Through two of three,
K

Email ThisBlogThis!Share to TwitterShare to FacebookShare to Pinterest
Labels: fantasy, his dark materials, YA fiction