"I might as well say, right from the jump: it wasn't my usual kind of job." 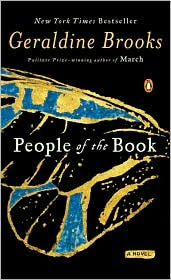 As I have mentioned before, I avoid reading books about topics that are blatantly sad or overly depressing. At the top of that list would obviously have to be the Holocaust. I have never had any desire to read about that period in time -- not because I am insensitive or uninterested but the opposite. I am too sensitive, I am too interested. My heart breaks and tears come to my eyes even to think of the smallest atrocity that happened during that terrible event. But since I inadvertently agreed to read a novel that not only included scenes during the Holocaust but also the Spanish Inquisition, I feel a new and strange sensation -- one of hope and triumph. I celebrate with this novel the simple fact that a group of people and this small book, so maligned and persecuted, survived.

People of the Book by Geraldine Brooks is a story that moves through time, beginning in 1996, shortly after the end of the Bosnian war, with a woman asked to restore the Sarajevo Haggadah -- a Jewish prayer book unique in that it contains illustrations and that it survived since the 1400s when it was created. As Hanna, the art specialist, discovers various clues to the history of the book, we are transported back in time to hear the imagined stories behind those clues. We also learn of the plight of the Jews in various times in history. Though we read about significant abuse and loss, we also read of the kindness of strangers, the strength of faith and a belief in a better future.

This book is based on the real life tale of this Haggadah -- a book rescued from certain destruction many times, presumably by Jews, Muslims and Christians. While Brooks has imagined the history of the book, the sense of exodus portrayed is very real. The book begins its journey in Spain, goes through Italy and on to Sarajevo -- with a stint in Vienna for restoration. I leave you with an illustration from this book and highly recommend that you read this amazing tale. 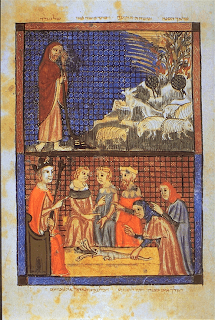 In awe of history,
K


Buy People of the Book: A Novel

on Amazon or find it at your local library.
Posted by Kristen M. at 12:23 AM