"It was dusk when the London to Little Hampton stage-coach lurched into the village ..." 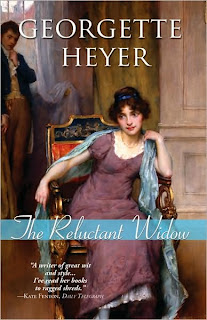 The most recent Georgette Heyer book that I finished is the most exciting one by far. The Reluctant Widow is the story of Elinor Rochdale, a formerly wealthy young woman who has been reduced in circumstances and has to seek work as a governess. Thinking she is getting into the carriage of her new employer, she instead is accidentally taken by Lord Carlyon's carriage to the home of his cousin, Eustace Cheviot. Carlyon is looking for a woman to marry his repulsive cousin in order to prove that he has no designs on Cheviot's property. When Carlyon's youngest brother arrives at the house with the news that he has accidentally stabbed Cheviot and that their cousin is now on his deathbed, Carlyon convinces Elinor to be the token bride. Unfortunately, Cheviot was into more trouble than just the financial issues they knew of. He appears to have been consorting with French spies and now those spies have come to Elinor's new home, bringing trouble with them.

This is a fast-paced narrative with plenty of exciting dialogue. Carlyon's younger brother Nicky had me laughing out loud a few times. Carlyon's cool sarcasm brought to mind the line delivery perfected by Cary Grant in many of his roles. It was apparently made into a movie in 1950 but in the credits there are character names that don't exist in the book (including changing Elinor's name to Helena for some reason) so it was obviously not a faithful re-creation.

A review of that movie also mentions "quite a number of passionate love scenes" which most definitely do not exist in the book. In fact, its classification as a "romance" perplexes me as the only romantic part of the book is in the last four pages and solely consists of a proposal and a kiss (which you will know is coming pretty much from the start of the book). I fear that many readers would choose not to read this book if, like me, they have a prejudice against the romance category due to some lesser quality works in that genre.

Each Heyer book that I have read so far (False Colours, Simon the Coldheart and this one) is quite different from the others. She has an amazing imagination and a very wide array of characters. I'm sure she has written a book for almost any type of reader.

Wondering how I can inherit an estate,
K