"Clare: It's hard being left behind." 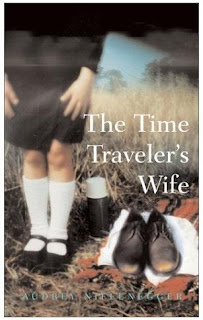 The Time Traveler's Wife is a book that I have frequently picked up at the bookstore, read the blurb and then decided against buying it. After so many mentions of it recently though, and the news that Audrey Niffenegger was finally working on a second book, I finally decided to give this one a chance. Besides going through half a box of tissues, I found a fascinating study of an unconventional relationship.

When Henry meets Clare, he is twenty-eight and she is twenty. He is a hip librarian; she is a beautiful art student. Henry has never met Clare before; Clare has known Henry since she was six ...

Henry is the time traveler and Clare is his wife. Henry's time travels frequently center around the meaningful people in his life so it's no surprise that his travels later in life are to the younger version of a wife he loves very much. However, his life is still somehow linear so he doesn't have memory of these visits until they actually happen for him. He begins traveling when he is five and it changes his life. Nothing travels with him so he always arrives at his destination naked and with no money or anything. This breeds a need for some rather questionable skills like breaking and entering, pickpocketing and fighting. His main goal, though, is to stop the time travel and to be able to enjoy his life with Clare.

This book is a touching story of a relationship that is strong enough to withstand all of the trials and separation that come with Henry's condition. I thought it was a bit crude in some parts but that might just be because I don't read very many modern novels. I didn't have any trouble following the time traveling Henry because every scene is identified as being either from Henry or Clare's point of view and is dated and lists their ages. This was very helpful!

There is a movie version of this book being released this August, starring Rachel McAdams and Eric Bana. It's a strange coincidence because at the end of this novel I was reminded of another McAdams picture, The Notebook -- and not just because of the number of tissues I dampened.

Grateful to have most of my moments with the ones I love,
K