Early Review: Mother of the Believers 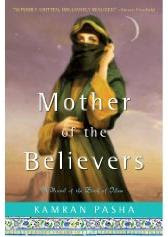 I was very excited to get a chance to read Mother of the Believers: A Novel of the Birth of Islam, the first book by screenwriter Kamran Pasha. When I read Salman Rushdie's The Satanic Verses last year, I became familiar with many of the names associated with the founding of Islam but the stories were exaggerated and twisted so I didn't get a good sense of the true history. Mother of the Believers is a novel and thus is partially fictionalized but it is based in the oral histories passed down through generations of Muslims and the history and characters are factual.

"Mother of the Believers" was the honorific title given to any of the wives of the prophet Muhammad. This narrative is the history and confession of the most beloved of the Mothers, Aisha. She married the prophet when she was only nine years old and she was his third wife. He ended up with many wives as he kept marrying widows that needed protection or women that were politically significant to the growth of the fledgling religion. Much of Aisha's story deals with her feelings while being a child bride and the mistakes that she makes in her life based on her youthful temper and her teenage jealousies. She was extremely beautiful but also somewhat impulsive and her outbursts would sometimes get her in trouble or embarrass Muhammad or the other Mothers.

Regardless of these things, I think that most readers will fall in love with Aisha the way that her father and mother, her sister, her husband and many more did. I normally don't recommend books because I think that tastes are highly subjective and individual but I think this book is a must read for people of all faiths and those of little or no faith. In our world today, Islam is so often misunderstood that it would be very productive for more people to familiarize themselves with its origins and its core beliefs. And while you would send someone to the New Testament to gain an understanding of Christianity, I have found the Qur'an to be a difficult entry point to Islam. This writing in this novel is very fluid and engaging and the reader will be familiar with the origins of Islam with little effort. If you would like to read the Qur'an or any biographies of Muhammad, the author also generously provides a list of sources as an Author's Note in the book.

Mother of the Believers is available to purchase today. For more information you can visit Kamran Pasha's website. I leave you with a quote from the author's blog --

All in all, there is enough in my novel to offend and outrage anyone who has a specific agenda regarding Islam. Some non-Muslims will label me as an apologist for defending the Prophet and suggesting that their critiques are unfair and motivated by a bigoted agenda. And some conservative Muslims will not like the book, because I show the early Muslims as fallible human beings, and their agenda is to portray Islam and its heroes in as perfect and pristine ways as possible.

But as a believing Muslim myself, I embrace the humanity of these people, as did the early Muslim historians. There is nothing to learn from a plastic saint who does not share our foibles and weaknesses. The point of “Mother of the Believers” is that if flawed, passionate, complex people like the founders of Islam could find spiritual enlightenment, maybe we can too.


Buy Mother of the Believers: A Novel of the Birth of Islam