"Maisie Dobbs shuffled the papers on her desk into a neat pile and placed them in a plain manila folder." 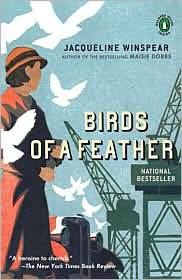 The thing that I'm realizing now that I'm through my second Maisie Dobbs story is that Jacqueline Winspear has written novels not mysteries. She holds back clues to remind you that she is controlling the story and how it unfolds to the reader. These clues also only have relevance in the context of this particular time and place which gives her the chance to incorporate specific historical knowledge into the story. Sometimes it's frustrating but when you let go and admit that you won't be able to solve the case by yourself, it's an interesting way to read a mystery.

Birds of a Feather, the second Maisie Dobbs novel picks up soon after the first and though it could possibly stand alone, relationships and character histories make more sense and have deeper meanings if you've read the first book already. Maisie gets a request to locate a missing woman but the case quickly escalates when it is found that the woman seemed to be in distress when she disappeared and that other women of her acquaintance have been found murdered. This story is again deeply rooted in the recovery of England from World War I.

I really enjoyed this novel and will definitely keep going in the series. I waited almost five months before reading this one and though I think this is a series not to be rushed through, it was just a bit too long of a break. Hopefully I'll get to the next book, Pardonable Lies, by the end of the year.

Trusting the lady with the knowledge,
K


Support our site and buy Birds of a Feather