I'm very excited to be participating in the Lord of the Rings Readalong over the next four months!  I believe that the last time I read the books was right before the first Peter Jackson film came out in 2001.  That was my second reading of the four books.  The first time was in college in the early 90s because T (my boyfriend at the time, now my husband) had a set of the books and I was curious.  Those, in fact, will be the books that I am reading again for a third time now!  Eva, the host this month of The Hobbit reading, asked for a picture of the version each of us is reading so here is mine ... a little blurry because I took it on the iPhone. 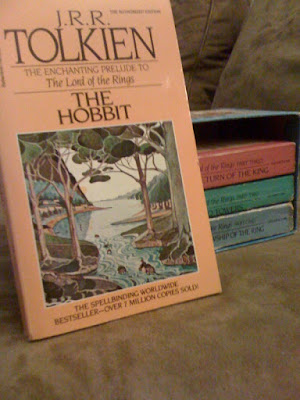 These appear to have been printed in 1986.  The edges are yellow (apparently on purpose as they are uniformly bright) and The Fellowship of the Rings is the only one that is a little worse for wear.  It probably spent time in T's backpack at some point.

Although I didn't read these books until college, I watched the old films many times as a kid -- the 1977 animated Hobbit and, less frequently, the 1978 Lord of the Rings movie.  Anyone who grew up in Southern California in the early 1980s couldn't have missed these since they were shown on many Saturday afternoons each year.

So, yeah ... I love Bilbo, am terribly creeped out by Gollum and love to imagine Smaug in all of his glittery splendor and I am definitely going to read this straight through -- probably in a week or two when I get some ARCs out of the way.  Are any of you participating or have you read these before?

Booking passage to Middle Earth,
K
Posted by Kristen M. at 12:10 AM