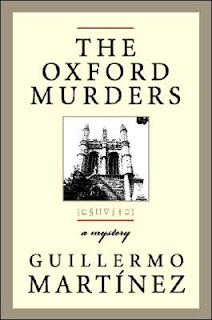 Well, I chose a shorter book for my first RIP V Challenge read but I almost didn't make it through it.  I had to turn to the back flap of The Oxford Murders

to look at Guillermo Martinez's bio and to confirm my suspicions -- namely, that "he earned a Ph.D. in mathematical science".  What does that have to do with a murder mystery, you ask?  Everything if it's this book.

Our unnamed narrator is a graduate student in mathematics who has come to Oxford from Argentina.  His advisor suggests he takes a basement apartment in the home of a friend -- an older, partially-invalid woman.  One day he approaches the front door and is joined on the doorstep by another man, Arthur Seldom, who is a famous mathematician.  There is no answer to their knocking and so they enter the unlocked front door.  This is where they find the owner of the house dead -- the first in a string of local murders that seem to be seeking Seldom's attention.

You might think that the reason that I knew the author had some sort of math background was because he made so many of his characters mathematicians but it's not that.  The reason is that a good portion of the first half of this book consists of various discussions of mathematical theory.  It's somewhat related to the plot but it was a tough bit to get through!  However, once I got through the maths, the plot really got going and there was little besides story in the remainder of the book.  I didn't love this one but didn't hate it either.

This book inspired a movie in 2008 and stars Elijah Wood as an American at Oxford (yes, they changed him from being Hispanic which makes no sense especially since Gael García Bernal was up for the role) and John Hurt as Arthur Seldom.  Apparently, most of the plot and many of the characters have been changed as well.  So I'm not exactly sure why this counts as a film adaptation and I probably won't watch it -- at least not to compare to the novel!


Support our site and buy The Oxford Murders

on Amazon or find it at your local library.  We bought our own copy.
Posted by Kristen M. at 12:14 AM