"The demon exploded in a shower of ichor and guts." 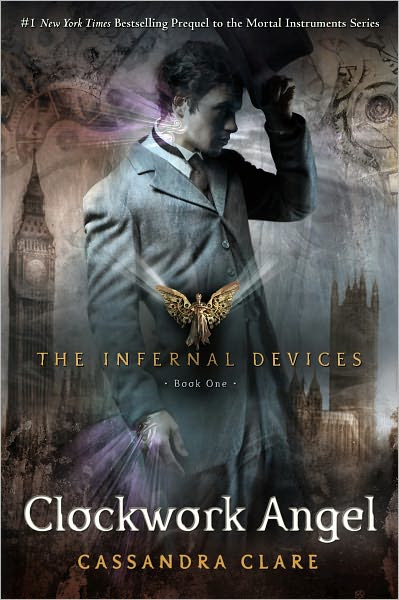 . This book, first in The Infernal Devices series and prequel to the well-known Mortal Instruments series, is an amazing trip through a Victorian England that is home to angels, demons and everything in between.

Tessa Gray is an American who has just lost her aunt and her only remaining family is her older brother Nate, who happens to be in London. He sends her a note and a boat ticket and tells her that he will take care of her. But when Tessa arrives, she is met by two strange women that call themselves the Dark Sisters. Soon, she is being held captive by these evil women, being forced to do things that she can't understand and wondering where her brother is. But then she is accidentally rescued by the mysterious Will Herondale and she begins an adventure through a world that most Londoners don't even see though it is right in front of their eyes.

Despite a bit of flowery language (repetitive mentions of Will's blue eyes, for example), this was a gripping and dark story of love and allegiance, right and wrong and so much more. It is the type of book that you want to read again almost immediately because of its complexity and characters. And, as you can probably guess, I can never get enough of alt-Victorian stories so this was a good fit. The second book in this series, Clockwork Prince, won't be out until December and it's going to be a long, long wait until then. Luckily, I can enjoy the four books in the Mortal Instruments series in the meantime.

I read this book for Tif's Tales to Tomes group read and I'm so glad that this was the selection of the month.

Falling into a dream world,
K

on Amazon or find it at your local library. We borrowed our copy from the library.
Posted by Kristen M. at 12:05 AM