One Week 'Til Read-a-Thon Time! 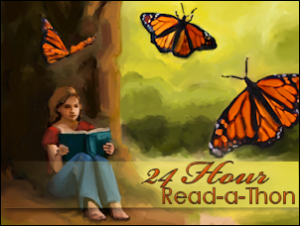 We're one week away from the 24 Hour Read-a-Thon, a.k.a. Dewey's Read-a-Thon and I've signed up to participate again this year as a reader. I never know what my schedule will be or how many hours I'll actually end up reading but I will try my hardest to read as much as possible with a husband and kid around. One of these times, I'll do the whole hotel room getaway thing!

So, I'll see you at 5am Pacific (though more likely a bit later as I'm not a morning person) on Saturday, October 22nd! I will probably write a couple of blog posts during the day but will be mostly on Twitter. You can see my tweets in the sidebar if you're not a Tweeter.

Eight Days of Luke by Diana Wynne Jones
Island of the Aunts, Secret of Platform 13 and The Beasts of Clawstone Castle by Eva Ibbotson
Spellbinder (re-read) and The Midnight Gate by Helen Stringer
Affinity by Sarah Waters
Leviathan, Behemoth and Goliath by Scott Westerfeld
A Monster Calls by Patrick Ness
The Technologists by Matthew Pearl

Email ThisBlogThis!Share to TwitterShare to FacebookShare to Pinterest
Labels: read-a-thon