It's a bit strange for me to be reading a lot of Victorian fiction in the spring but after The Solitary House, I was in the mood for more so I grabbed The Somnambulist by Essie Fox as my next read. This is one that I was looking forward to and I really enjoyed it. The only way that it suffered in my super-picky mind was because I was expecting a neo-Victorian novel of the variety written by Michael Cox (his books could almost have been actual Victorian novels) whereas this one had some decidedly modern topics and scenes. 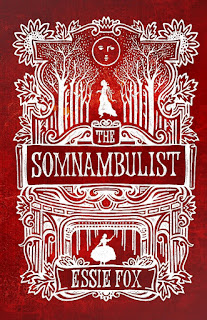 Told from the point of view of Phoebe Turner, a young lady of modest means, this is a tale of devotion, deception and redemption. In a household torn in two between the performing arts and religion, between aunt and mother, Phoebe isn't entirely sure who she is or who she wants to become -- and a number of things will push her in many different ways before she becomes a woman with her own mind and heart.

Though I was never entirely sympathetic to Phoebe, her story was compelling and I enjoyed this story. As I said before, I was a bit surprised by some hot and steamy scenes but only because of my own expectations for this novel. There's also a strong thread of anti-Semitism through the novel, something that readers of Victorian novels will be familiar with, though perhaps not to the extent that it is explored in this book. There is also a bit of the supernatural in the story -- just enough to add some flavor and to cause the reader to question Phoebe's reliability as a narrator (and her mental health). All of these elements are put together very well and I hope that Essie Fox has another book in the works.