"The desert was empty, as though a great drain had sucked the world underground." 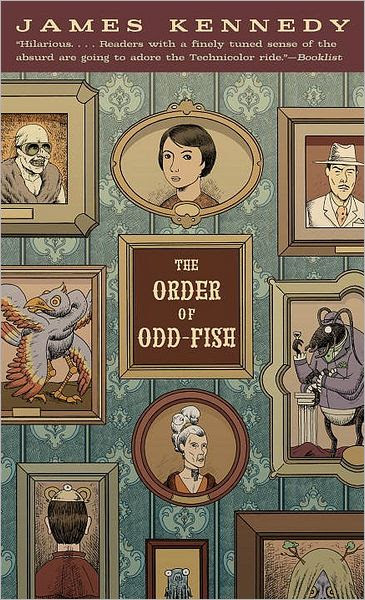 As I was reading some Terry Pratchett in early July, I got an email that offered this book, The Order of Odd-Fish by James Kennedy, for review and it seemed like a read that was in the same vein of absurdist literature that I was already enjoying. I also remembered the positive review that Aarti gave it a couple of years ago so I accepted and expected a fun read. What I didn't expect was a well-crafted, frankly brilliant novel that left me wishing for more. Though it is billed as YA, I didn't see any reason besides a teen protagonist that this couldn't be enjoyed by lots of adult readers as well.

That teen protagonist is Jo Larouche, thirteen years old and an orphan, who lives with her "aunt" Lily Larouche in a bizarre, bedazzled palace in the California desert. They're celebrating Christmas Eve with a rip-roaring costume party when, well, things start happening. Not only does Jo notice a large man watching her, but she eventually ends up talking to a man-sized cockroach (not a costume). Then, at a pre-appointed time, a package falls from the sky with her name on it -- a cardboard container that contains a mysterious black box. By the next morning, Jo's life is in danger and what follows is an adventure that could only come from a very fertile imagination!

I'll admit that after a couple of days of reading this book regularly, it got to the point where I simply couldn't put it down. With itchy eyes and mild regrets about the following morning, I finished reading it at 4:30 in the morning! The villain of the story was, to be honest, terrifying. But Jo and her friends and "family" were fantastic. The story heads in a direction where you truly aren't sure who will survive the madness. Though some might find this story to be a bit much, I think it certainly deserves a wider audience. If you're in the mood for something exciting and original, this one would be worth a look (and take a peek at the fan art too)!

Joining the Order and waiting for my ostrich,
K
Posted by Kristen M. at 12:38 AM