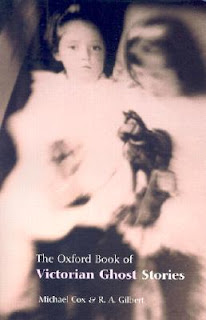 I didn't mean to go missing for two weeks from the blog. I guess back to school tasks in the school library, getting back to the gym regularly and taking two weeks to read this book all conspired to keep me away. But here I am, with my first RIP VIII book done. Hooray!

The Oxford Book of Victorian Ghost Stories is a collection edited by Michael Cox and R.A. Gilbert. It has 35 stories, written between 1852 and 1908. As they are presented in chronological order, it was quite interesting to see the progression of the ghost story through time, though the basic elements of the stories really did stay the same.

Some of the best stories in the collection were --

If you read Victorian fiction, you probably recognize a lot of the names on that list (and there were other stories by Dickens and Kipling and more). It was interesting to see that ghost stories were standard fare for many authors of the time. The story that I found most haunting was the last in the book, the one by Algernon Blackwood. It made me seriously uncomfortable while I was reading it and it was just a great ghost story, with a fully explained but nonetheless frightening scenario. I've done you a favor and found an online copy of The Kit-bag. If you need just one creepy story to get you in the mood for the season, this might do the trick. Enjoy!

Jumping at every little sound,
K
Posted by Kristen M. at 12:40 AM