New Release: Things Half in Shadow 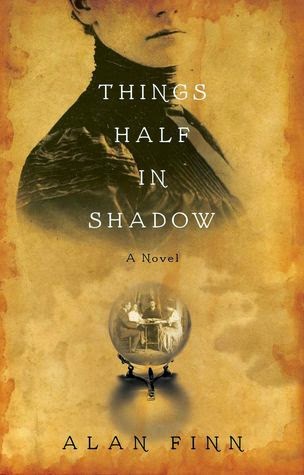 Things Half in Shadow is a roller coaster ride of a story, taking the reader through both high and low society in Philadelphia in 1869. Alan Finn has brought together spiritualism and showmanship, mediums and P.T. Barnum, in a tale of murder and suspense. Edward Clark, a young crime reporter, orphan, and Civil War veteran with a well-heeled fiancée, is dragged into the world of spiritualism through his job. He is asked to do a series of articles that debunk the various mediums operating in the city. The first one he goes after, Lucy Collins, turns out to be the wrong thread to pull, one that threatens to unravel his entire life.

Though the start of this story was a little shaky, it quickly picked up pace and ended up barreling through all sorts of crazy situations, one after another. Though the story went well into the realm of the unbelievable, it was of the best sort, the kind that makes for a very entertaining read. I believe this is first in a series and I'll be interested to see where it goes from here. (There are no cliffhangers or anything like that. This book works perfectly well as a standalone.)

The back of the book says "Alan Finn is the pen name of an acclaimed author of mysteries and thrillers". Well, unable to resist any mystery, I did a bit of Googling and and came across this fascinating article. It's worth a read if you've ever wondered why an established author might change their name mid-career.